Paradise is a census-designated place with a population of over 231,000 residents making it the most populated CDP in the United States. Paradise came to be on December 8, 1950, and has been growing ever since. You can find many important areas in Paradise such as McCarren International Airport, University of Nevada, and most of the Vegas Strip. With Downtown as the exception, Paradise is the tourist hub of the Vegas area containing most of the attractions. This community used to be separated into Town A and Town B but in 1953 Town A became Winchester while Town B remained Paradise.

Containing most of the strip and many of Vegas’ attractions, Paradise is a community full of things to do and sites to see. Paradise is a community that offers residents an urban feel where most residents own their homes. It is rated as the 9th best place to retire in America. There are many families and young professionals that live in Paradise and there are wonderful schools to attend. There are many attractions and exhibits such as the Neon Museum or the Titanic Artifact Exhibit. Once you build up an appetite, visit the highly-rated Gangnam Asian BBQ.

Services We Offer In Paradise 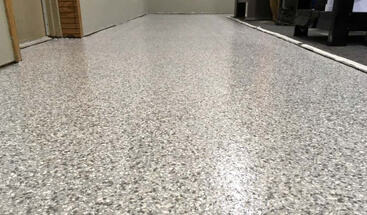 Epoxy flooring is a durable flooring that is made to last for 20 years or more with proper maintenance. The maintenance of these floors is incredibly easy only requiring a mop and broom. These floors come in a variety of sheens but are widely popular for their wax-free shine. There are many different colors, patterns, and types of epoxy to choose from. These floors are stain-resistant against even tougher chemicals such as bleach or oils and can withstand heavy foot traffic without fading. This cost-effective flooring will increase the value of your home and can be installed in any room! 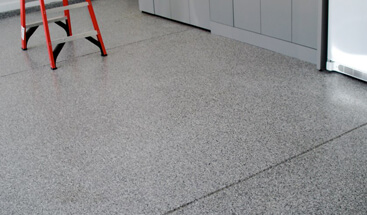 Epoxy is great for garage floors and this is one of the most common places to have this flooring installed. There are many different options to choose from like metallic epoxy or decorative flake epoxy. Whether you’re looking to have a safer workspace or a showroom shine for your car, garage floor epoxy delivers! This flooring is stain-resistant to chemicals such as gasoline and motor oil. Heavy machinery or impact from dropping tools won’t harm this floor making it great for a workshop floor. Compared to dusty concrete, this seamless floor is cleaned with ease! 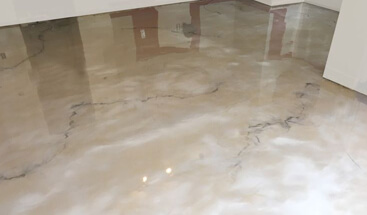 Metallic epoxy is beautiful and durable flooring that has gained popularity over the years as a great indoor flooring option. This flooring comes in many different colors and is known for its unique swirled design and high shine! This flooring can be done as a simple, single-colored pearl-like floor or can mimic the scenes of nature such as rushing water or molten lava. This beautiful flooring is just as durable as traditional epoxy and possesses the same strength properties as well. The seamless design of this flooring makes it easily cleaned and maintained. Stain-resistance is another great benefit of this high shine floor!